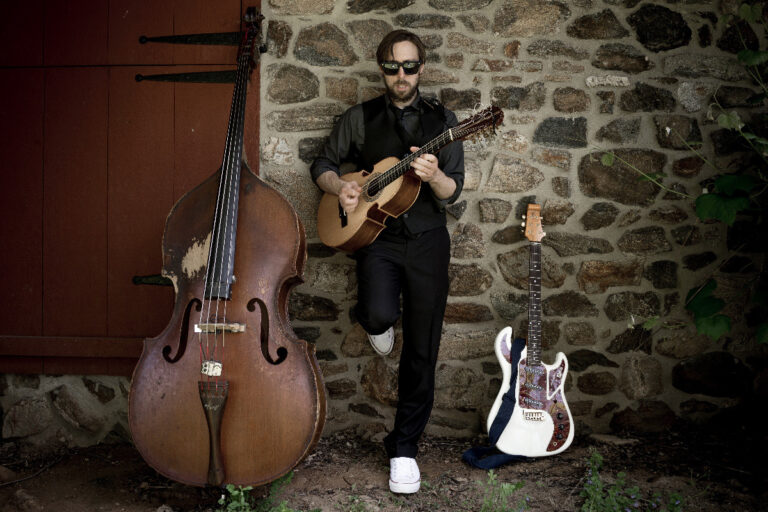 As an upright bassist, composer, and multi-instrumentalist, Jason Fraticelli is seen and heard often at the center of many musical scenes in the Philadelphia/New York communities. For the past 20 years he has been acting as sideman for many different artists such as Matisyahu, Melody Gardot, and Cyro Baptista, while at the same time always fascilitating his own groups such as the Fresh Cut Orchestra, The FCC, and The Jason Fraticelli Band.

At the age of 13 he played one of his first concerts, on drums, opening for reggae artist Jimmy Cliff in Philadelphia with his dad and his uncle in a group called Elysium. It was that experience that gave Jason the inspiration for music performance that was to shape a long and ongoing career.

While attending Bucks County Community College, for performance and composition, Jason was taken to the Philadelphia famous Ortlieb’s Jazz House for the first time. The experience of watching Philly legends Mike Boone (the Buddy Rich Band), Sid Simmons (Grover Washington), and Byron Landham (Joey DeFrancesco), as well as several generations of other musicians sitting in, was enough to inspire him to purchase his first upright bass and continue his pursuit of jazz education.

Soon after, Jason continued studying at the New School for Jazz and Contemporary Music in New York City. It was there that he was able to learn from teachers such as Reggie Workman (from the early John Coltrane quartet), Cecil McBee (studying bass proficiency), Jane Ira Bloom (ensemble studies), and George Garzone (improvisation). Within an ensuing career, Jason has had the experience of performing with many different musicians, such as John Ellis, Skerik (Les Claypool), Marco Benevento, and Billy Martin (MMW), touring in groups, such as The Jacob Fred Jazz Odyssey, Matisyahu, Melody Gardot, and Cyro Baptista’s Banquet of the Spirits, and recording with several different artists such as G Love, Robert Glasper, Mark Guiliana, and Taylor McFerrin.

In 2013 Jason was awarded a project grant from the Pew foundation for the purpose of recording his extended work the Mothers’ Suite, a six movement piece to be recorded by his 10 piece co-lead group the Fresh Cut Orchestra. This work came out in 2015 on Fresh Cut Orchestra’s debut record ‘From the Vine’ which was released on Ropeadope records with acclaimed reviews from the New York Times, Downbeat, and NPR’s All Things Considered. In 2014 Fresh Cut Orchestra went on to receive the Kimmel Center Jazz Residency Grant which led to the collaborative work entitled ‘Life Mosaic’, a 4 movement piece written about the four stages of life to be recorded and released in the near future. Later that same year a Subito grant was awarded to Fresh Cut Orchestra in order to finish studio production on their second record ‘Mind Behind Closed Eyes’ which will be released by Ropeadope records in 2016. Fresh Cut Orchestra has been receiving rave reviews while performing at renown performing arts center venues such as the Painted Bride Arts Center, the Kimmel Center for Performing Arts, and the Kennedy Center for Performing Arts in Washington, DC.

In 2016 Jason will be releasing his solo record entitled ‘The Dream Diaries’ from his group the Jason Fraticelli Band which will be out on Ropeadope Records. Also set to be released the same year is Fresh Cut Orchestra’s 2nd record ‘The Mind Behind Closed Eyes’. Jason is also working on his Dad and his Uncle’s album in which Jason is the drummer and producer. This is currently in production and could be released as early as fall of 2016.